Skip to content
Home » history » The magic lantern was an early form of slide projector that was an early step on the road to the motion picture technology of today. 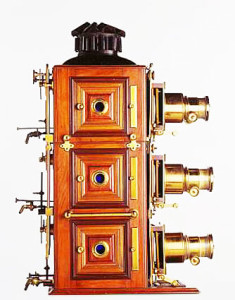 The magic lantern was invented in the 1600’s, probably by Christiaan Huygens, a Dutch scientist. It was the earliest form of slide projector and has a long and fascinating history. The first magic lanterns were illuminated by candles, but as technology evolved they were lit by increasingly powerful means.

The name “magic lantern” comes from the experience of the early audiences who saw devils and angels mysteriously appear on the wall, as if by magic. Even in the earliest period, performances contained images that moved—created with moving pieces of glass.